A couple of weeks ago, I came across the following tweet: 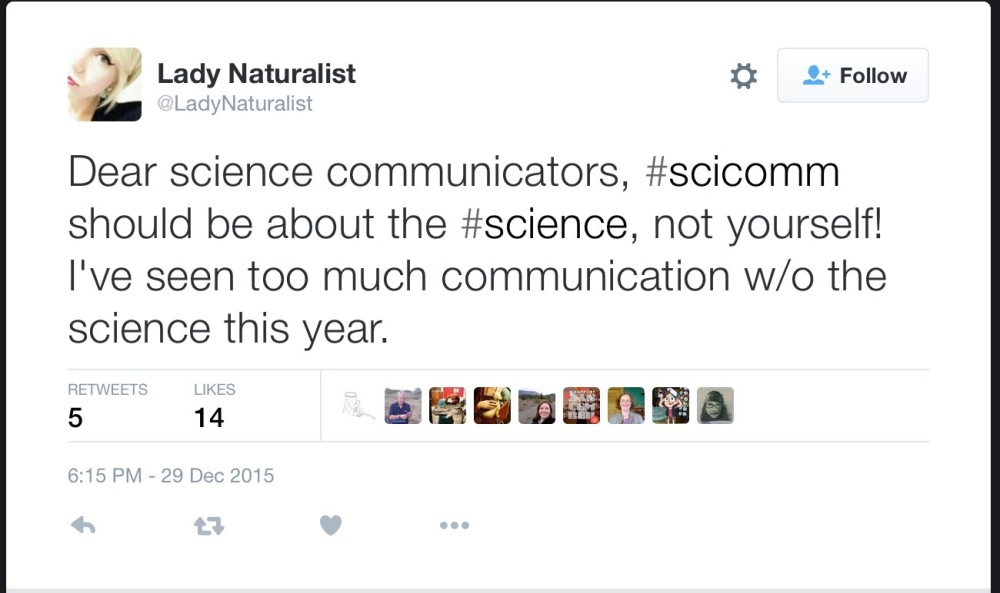 Guilty as charged! By trade, I am a scientist, but for fun/professional growth/genuine interest in spreading the message of science, I also consider myself a science communicator. I agree with @LadyNaturalist that a lot of science communicators do talk, tweet, and Instagram about themselves. But I don’t necessarily agree that this is bad, or that it isn’t about the science.

It seems like most science communicators are scientists, which means that they are not likely getting paid for their science communication. Because they are scientists, this puts a bias on communication in two ways. First, their main occupation is science, limiting time for communication (and science is already 40+ hrs/ week itself), and making it less likely for people to communicate about science that is not theirs. Writing posts about others work or areas of research not of my own inherently takes longer because I want to make sure I got the science right. It’s easier to communicate about what you know. Second, a more selfish reason, but people use science communication as a means to promote their own science. Science is rough. It’s extremely competitive, everyone is super smart, and it’s filled with bad news (papers rejected, grants turned down, etc.). Let’s face it, getting people to notice your work – journalists, but other scientists, makes it more likely that people know you and your work, and that you are a success. This is especially true for young scientists, who also seem the most likely to be excited and active about science communication and also on the social media venues to conduct it. It also feels good! When people tweet or talk about my research, it reminds me that my work has meaning in the world.

Is it really not about the scientists?
People don’t really understand how science works or what a scientist does. My dad owns his own business and having seen him think about it 24/7 and have his and our lives depend on it, I never wanted to own my own business. Yet, as a scientist, I feel like there are so many similarities and to explain it to people, I relate it to my dad’s business. As a scientist, you are trying to get grants and get papers out. This is how scientists are measured as being successful. Essentially, you are always in competition, and therefore can always be working. This is especially true for younger scientists trying to get their first permanent job, which happens usually after a bachelors, masters, PhD, one maybe two postdocs, so in your mid 30s if you streamlined this process. Keep in mind you are not paid well throughout this whole process. Therefore, you have to really love what you do to take on a job like this. And that is why scientists do it. They definitely aren’t doing it for the money or the ease, but for the love of it, and thus their blood, sweat, and tears. So much of our lives are intertwined with our work, making it sometimes difficult to separate the person from the science. Science is a process and the scientist is the one conducting it.

Science needs role models
Science has an image problem. Specifically, it’s often old, white men in lab coats. This is a real problem in attracting people of diverse backgrounds to enter the sciences as a profession. Often girls and minorities don’t see themselves as future scientists simply because they don’t have role models in their community. Scientists promoting their science on social media as themselves offers an opportunity for kids who don’t look like traditional scientists to see scientists who look like them.

I hate to say it, but unless there are more jobs that hire people just to communicate science, there is not a whole lot of incentive for scientists to step outside of their research box and communicate about research that isn’t their own.