When the WildlifeSNPits team first started discussing whether to participate in the #365scienceselfies challenge, I really didn’t want to do it.  I was uncomfortable that my face would be all over the Internet (more than it already is).  But it also sounded like an opportunity to learn something new about myself, so I agreed to the challenge.

My Favorite Selfies of the Year
Seriously, my favorite selfies from the year were the ones with my labmates.  Partly because if I was taking a picture with other people, then we had to be doing something fun.  Plus their personalities shined through.

However, my favorite picture of myself is this one doing lab work.  I rarely do lab work and suspect that I will go longer and longer stints without seeing the bench.  But I like this one because it is the image I have of myself as a scientist. 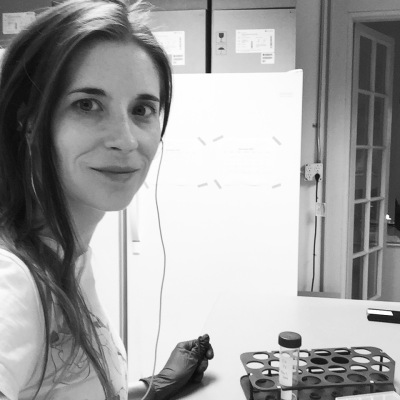 My favorite selfies from my WildlifeSNPits colleagues were the two below, mostly because they look beautiful doing their science.

Overall, I did not like #365scienceselfies (see below).  Like many I can’t say 2016 was my best year, so this comment on one of my selfies came along at a good time.  A little background, I’m rather tired of SciComm.  I’m over here flailing and failing while the community is yelling, “more, more SciComm!”  And when I do connect, I feel like I’m only talking to other scientists when the goal is to communicate with non-scientists.  So I posted the selfie below while freezer diving for rat popsicles with my labmates, because we needed more adult skulls for a morphometrics project.  And a woman I was on high school dance team with wrote that I was like Amy Farrah Fowler.  I had to look up Amy Farrah Fowler and saw that she is a character on the TV show, “The Big Bang Theory.”  I took this as the highest compliment.  It’s easy for me to forget that I may be the only scientist people know outside of TV and movies.  It’s easy to forget because I only talk to other scientists; my colleagues are scientists, my friends are scientists, most of my causal acquaintances are scientists.  I know I have one of the coolest jobs in the world, but the unique aspects of being a scientist are easily normalized when you and everyone you know do the same thing (and have simultaneous stress out sessions around grant and job seasons).  Whether it is my actual work that reaches people or showing that scientists are normal people (and not some amorphous global conspiracy for politicians to poo poo on), by the end I saw the value of #365scienceselfies or more specifically the power of photos for SciComm.  I’ll continue to post selfies and use Instagram to tell science and natural history stories, but I’m not going to stress out trying to keep up with a daily picture.

What I Disliked about #365scienceselfies
My double chin, and all 14 camera angles that showed it off.

I really did not like #365scienceselfies for exactly the reasons I was hesitant to participate, but most of all it was a total highlight reel.  In social media terms, a highlight reel is the result of only posting the best parts of one’s life.  It distorts the truth by not allowing people to view negative aspects of another person’s life or personality, and makes others feel bad about themselves.  And I aimed to create a highlight reel with #365scienceselfies.  I certainly didn’t want a record of my bad days, so there was no way I was going to share them with you.  Many days I didn’t even take a selfie because it would have been boring to take yet another one with my computer, but other days there was no way I was going to show the sadness, disappointment, or frustration I felt as a working scientist.  Then there were times of the year when my personal life was hard and I didn’t have the energy for selfies, most notably after my sweet cat Tatum died.  The whole thing felt so very fake; and I commend those that showed a greater emotional range than myself.  Also, even though I told my labmates pretty earlier in the year that I was posting science selfies, can we acknowledge that it’s awkward to take selfies at work?!